A pair of pressed-backed chairs with oak spindles faced the wood-fueled cook stove in my grandparents kitchen on the farm, one on each side of the washstand. From my seat here in the summer, I could look over my shoulder through the kitchen window where I saw two white wicker chairs sitting near a stonewall. An apple tree at the edge of the lawn shaded them.

My grandparents would usually take some time out from their endless chores to sit there, mostly silently, dwelling on their own private thoughts, a few words passing back and forth now and then. Occasionally the wicker would creak as they shifted positions.

They spoke in Polish without a lot of emotion so I wasn’t able to sense their moods.

“Róża,” my grandfather said. “Róża” meant “Rose”. That was Babci’s name. She grew into that name as surely as the flowers that she loved tending in the perennial beds that border the lawn. She had phlox running down the length of the woodshed. The phlox was as tall as I was, and each stalk was topped with a curly head like mine. I see myself standing in front of them in the Kodacolor pictures that Uncle Joe took on sunny, summer days.

“Smile! Smile, everyone!” Uncle Joe said. Then we smiled, or some of us did, and he snapped the photo, signaling that it was OK to run off and play.

From here, dwelling in the cushioned seats of their wicker chairs, Babci and Dziadzia could view the undulating hills and flat hayfields, the pastures of the farm rising behind the orchard, the woodlot in the distance. This was what they had come to America for. 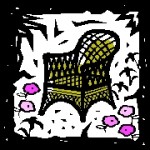